On 8 March 2017, the Prime Minister of Timor-Leste, H.E Rui Maria de Araújo and Australian Ambassador to Timor-Leste, H.E Peter Doyle, officially launched the Partnership for Human Development (PHD) program to support the well-being of Timorese people over the next decade.

PHD brings together Australian Government investments in Timor-Leste across health, education, sanitation, water, social protection, gender equality, disability and nutrition. Program partners work together to support the Government of Timor-Leste in delivering improved basic services to communities across the country. The program is a long-term investment – from 2016 to 2026 – with AUD $120 million allocated by the Australian Government for its first five years.

Over 200 participants attended the launch event in Dili. Prime Minister de Araújo delivered a keynote address acknowledging the importance of human development. He thanked Australia and said both countries share the Government of Timor-Leste’s goal of “building and sustaining a healthy, educated and prosperous population.”

“Australia is fully committed to supporting Timor-Leste’s continuing determination to invest in its people. This investment will improve the lives of Timorese people and will enable them to contribute more completely to the development of their country.”

The launch of PHD coincided with International Women’s Day and the event celebrated the achievements Timor-Leste and Australia have made together to advance gender equality. All of Australia’s development programs in Timor-Leste prioritise gender as a cross-cutting focus.

PHD’s Access and Equality Lead, Dulce da Cunha, delivered a bold speech at the launch, urging attendees to challenge people who blame tradition and culture for the way women are treated in Timor-Leste.

“Our traditions are based on the principle of respect for both the feminine and masculine world. Both are seen as equally important,” she explained. “So the problem for me is not the culture, but how we are interpreting our culture in practice.”

A student short film competition on rural women was inaugurated at the launch, with journalism students from UNTL and UNITAL taking part. Students will travel to municipalities across Timor-Leste over the next six months to profile rural women making significant contributions to the development of their country. The winner will be announced at an event to celebrate Rural Women’s Day in October.

The launch was followed by a showcase of Australian development support in Timor-Leste at Timor Plaza’s centre court and carpark area.

The showcase featured interactive market stalls where visitors met and spoke directly with program staff, collected giveaways, and took part in stage activities. Visitors were also able to write their dream for Timor-Leste on a large “dream wall” on the main stage. 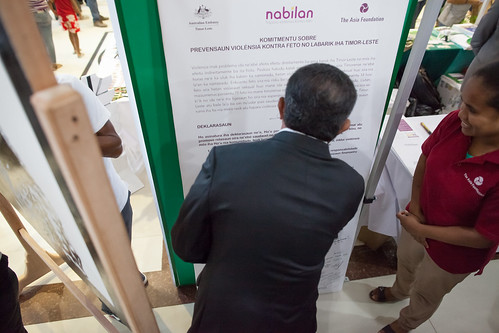